The Lakeville City Council will be meeting at 6:30 p.m. on Tuesday, January 17th. Public comments will be at start of meeting. There is an item on the meeting agenda to make an appointment to fill the council seat.

Lakeville City Council met on Monday, January 9th at 8:00 p.m., to reach consensus on a candidate to appoint to fill the empty council seat, from the 3 finalists they previously selected.

The Lakeville City Council members elminated me from the appointment process to fill the council seat. This despite my strong finish in the November election, background and strong appointment application (scroll down for further information). Supporters signed a petition of support (now closed) for me being appointed to the open seat.

I attended this meeting that was open to public. I was the only candidate seeking appointment who attended. A few points I observed from the meeting:

As far as getting up-to-speed quickly, there was no discussion of my military leadership tours of duty, where I demonstrated the ability to get up-to-speed quickly in the widest variety of complex military-government operations.  For example, when I took over as Chief of Staff for individual Navy personnel deployed to Afghanistan. I flew into Afghanistan with no preparation nor sleep, and had to get up to speed quickly on a complex force drawdown under difficult circumstances.

Nor was there any council discussion at the meeting of other experiences such as where I had to get-up-to speed quickly working with other military and all levels of government supporting homeland security in Minnesota. It would have been fair to interview with the Council about how these and other experiences demonstrated my ability to get up-to-speed quickly in a complicated government organization/operation; in high stress situations. All of which were in my resume submitted to city council.

In the meeting, no significant consideration was given to my strong performance in the November election, putting myself out for judgment by the voters. And the valuable citizen input and capability this would bring to City Council. In fact, one of the council members denigrated my election performance at the meeting.

Anyhow, my judgment is that a candidate(s) for appointment has already been identified by the City Council; and identified well before the November election. This “appointment process” is designed to “go through the motions.”

Next Council meeting is January 3. Plan is to then discuss interviews and select a candidate to fill the open seat on January 9.

THANK YOU to all you folks who supported me in the election, and after in this appointment process. Stay Tuned!

Have a Merry Christmas and Happy Holiday Season!

I stood for election to the City Council this last November. Congratulations to incumbents Michelle Volk and Joshua Lee who won re-election to these two council seats. With Councilman Luke Hellier being elected Mayor, his current City Council seat will become open in January 2023.

January 3, 2023 - Conduct Interviews (likely before the city council meeting scheduled for that evening)

I will be participating in the Lakeville City Council's appointment process to fill the open seat. All meetings are open to the public. I'll appreciate any citizens who can attend to show support; or any other support you can voice. Here are additional ways you can support me:

I had a very strong third place finish in the November City Council election. I received over a quarter of the total votes cast by Lakeville residents, less than 2 percent behind the second place percentage of total votes cast. I believe this deserves strong consideration in filling this third Council seat, with the first 2 seats filled in the November election. My "Independent Voice" platform, personal outreach and non-partisan approach resonated with voters. Over 12,000 Lakeville residents cast their vote for me, and those votes should be considered in an appointment decision.

Over the course of the campaign season I knocked on thousands of doors and engaged in hundreds of "doorstep conversations," to get the pulse of the community.   This kind of broad citizen feedback, from "the deck plates," is extremely valuable to a city's leadership; and I hope to bring that to Lakeville's city council.

My background and experience will also add value to Lakeville City Council. This includes operating a small business, serving in the U.S. Navy (retired, rank of Captain), licensing as a Civil Engineer; and education that includes a master's degree in business and an advanced degree from a U.S. military staff college. I have also served our community through my membership in Rotary Club and Veterans of Foreign Wars.

My military background will prove particularly valuable to our City’s leadership team. I spent 14 years in actual command of military units. I was also Chief of Staff for individual U.S. Navy personnel deployed to Afghanistan/Mideast. My proven command leadership skills, running large and complex organizations, will translate well to city leadership. I was always selected for positions of increasing responsibility; and accountable for getting-up-to speed quickly in new challenges with which I had little past experience.  And, most importantly, working well with new leadership teams.

Please check back for future updates. Thank you.

I am independent, non-partisan and non-polarizing. I am a political outsider not funded by ANY Special Interest!

To learn more about me, please visit the “Meet Richard” section (See also my Military Snap-Shots & On the Campaign Trail).

Why I Am Running for City Council

I believe I can add unique value to the City Council. My background as a senior military officer brings command leadership skills and experiences running large and complicated organizations, that will translate well to city leadership. I have lived the military leader’s code of “Authority, Responsibility, Accountability.”

My engineering education and background will also add value as we tackle Lakeville’s biggest challenge of managing our explosive growth. Having raised 5 children in Lakeville, I understand the challenges families face.

We do have big challenges! Lakeville is growing to be a dominant city in the Twin Cities metro. I can help us make this transition in a manner that balances development with maintaining Lakeville’s “small town” flavor. I have the leadership experience and technical background to help us make this journey together.

A top priority will be sustainable growth that balances quality economic, community and housing development; as we move forward in future stages of Lakeville’s 2040 development plan. This includes prioritizing downtown development.

Linked to this priority is to keep Lakeville “Family Friendly.”  We should improve our sense of community and inter-connectivity, provide diverse “lifetime” housing options, and invest in the community – Keeping Lakeville the place families want to be. This also increases everyone’s property values!

Public Safety is always a government’s highest priority. This means not only supporting our superb police and fire personnel, but all community stakeholders who contribute to our public safety.

As a Chamber of Commerce member, I value a strong and vibrant business climate. This is important to creating local jobs, growing our tax base, and providing more shopping and entertainment destinations.

I support a local government that is accountable, transparent, and tolerant. Everyone’s voice should be heard! I have “common sense” positions on the issues, with no hidden agendas. Overall, I will work to keep Lakeville family-friendly, business-friendly, smartly governed, and safe.

I’m shocked at the increased polarization that is gridlocking national and state governments; and has even turned our local school board election into partisan “trench warfare.” I’ll work to keep Lakeville city government friendly and non-partisan, where one strives to find something good in a viewpoint they disagree with. Just like we did in the military!

My Number One job will always be to listen to YOU… and be “Your Independent Voice”!

Can I have the privilege of your VOTE? 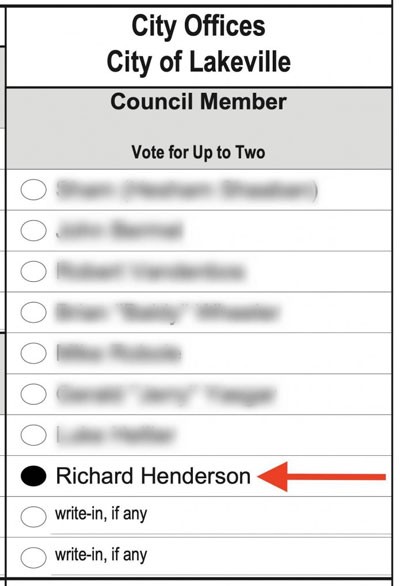